The DOST dataset preserves scene texts observed in the real environment as they were. The dataset contains videos (sequential images) captured in shopping streets in downtown Osaka with an omnidirectional camera. Use of the omnidirectional camera contributes to excluding user’s intention in capturing images. Sequential images contained in the dataset contribute to encouraging developing a new kind of text detection and recognition techniques that utilize temporal information. Another important feature of DOST dataset is that it contains non-Latin text. Since the images were captured in Japan, a lot of Japanese text is contained while it also contains adequate amount of Latin text. Because of these features of the dataset, we can say that the DOST dataset preserved scene texts in the wild.

The objective of this task is to obtain the location of words in the video in terms of their affine bounding boxes. The task requires that words are both localised correctly in every frame and tracked correctly over the video sequence. All the videos will be provided as MP4 files. Ground truth will be provided as a single XML file per video. The format of the ground truth file will follow the structure of the example below.

where <frames> is the root tag. <Frame ID="*num_frame*"> identifies the frame inside the video. ID is the index of the frame in the video.

represents each of the objects (words) in the frame.

For the text localization task we will provide bounding boxes of words for each of the images. The ground truth is given as separate text files (one per image) where each line specifies the coordinates of one word's bounding box and its transcription in a comma separated format (see Figure 1). 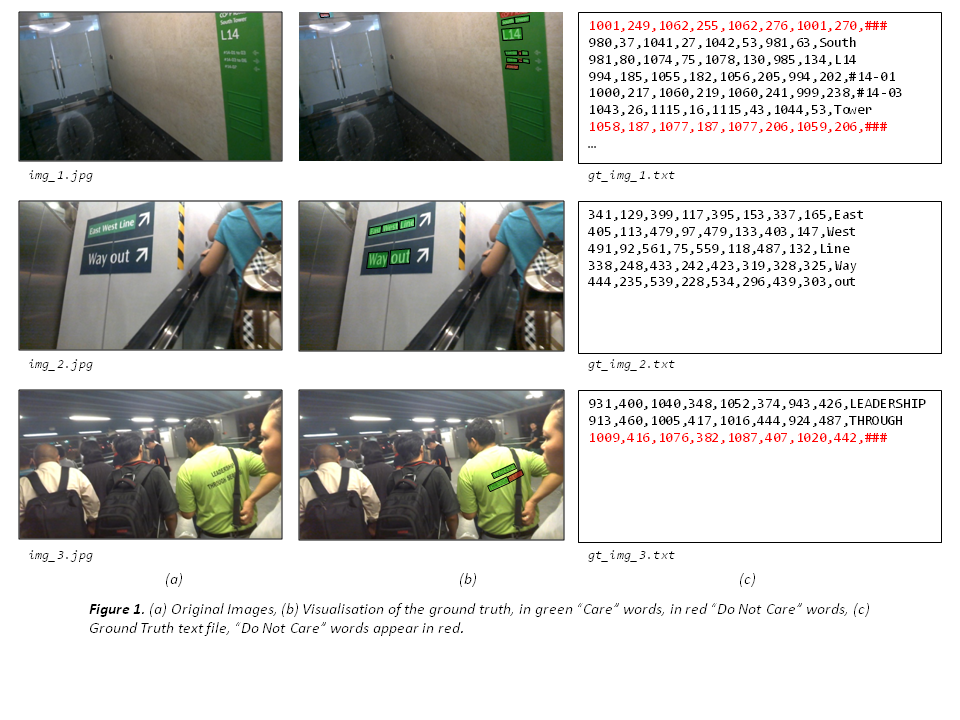 For the text localization task the ground truth data is provided in terms of word bounding boxes. Unlike Challenges 1 and 2, bounding boxes are NOT axis oriented in Challenge 4, and they are specified by the coordinates of their four corners in a clock-wise manner. For each image in the training set a separate UTF-8 text file will be provided, following the naming convention:

The text files are comma separated files, where each line will corresponds to one word in the image and gives its bounding box coordinates (four corners, clockwise) and its transcription in the format:

Please note that anything that follows the eighth comma is part of the transcription, and no escape characters are used. "Do Not Care" regions are indicated in the ground truth with a transcription of "###".

For the word recognition task, we provide all the words in our dataset with 3 characters or more in separate image files, along with the corresponding ground-truth transcription (See Figure 2 for examples). For each word the axis oriented area that tighly contains the word will be provided.

The transcription of all words is provided in a SINGLE UTF-8 text file for the whole collection. Each line in the ground truth file has the following format:

An example is given in figure 2. Please note that the escape character () is used for double quotes and backslashes.

In addition, the relative coordinates of the (non-axis oriented) bounding box that defines the word within the cut-out word image will be provided in a separate SINGLE text file for the whole collection. Coordinates of the words are given in reference to the cut-out box, as the four corners of the bounding box in a clock-wise manner. Each line in the ground truth file has the following format:

An example is given in figure 2.

For testing we will provide the images of about 2000 words and we will ask for the transcription of each image. A single transcription per image will be requested. The authors should return all transcriptions in a single text file of the same format as the ground truth.

For the evaluation we will calculate the edit distance between the submitted image and the ground truth transcription. Equal weights will be set for all edit operations. The best performing method will be the one with the smallest total edit distance.

In the video mode, each place consists of following files.

Localisation (Task I1) and End-to-end (Task I3) Tasks Each place consists of following files.